The objective of the reproducibility initiative at SC is to advance scientific rigor. SC achieves this objective by allowing technical contributions to engage in enhanced reproducibility. SC21 continued the practice of achieving enhanced reproducibility via appendices but further developed on the structure, required content, and evaluation of appendices, thus advancing the overall objective. This practice comes under the sole oversight of the Artifact Description/Artifact Evaluation (AD/AE) Committee. In this report, we highlight some of the achievements of this committee, describing its scale, complexity, and the dedicated effort of several members that improved the practice and brought it to successful fruition.

SC21 AD/AE advanced the current state in several ways: (i) adopting an incentive-based approach of engaging authors, requiring minimal involvement of the Technical Program Committee (TPC), (ii) laying out the rules for applying ACM Badges in a way that is consistent irrespective of the publisher, (iii) using community computing infrastructure for Artifact Evaluation, (iv) establishing the Best Reproducibility Advancement Award and choosing its first recipient, and finally (v) engaging with more than 50 members of AD/AE in a timely manner increasing awareness and enthusiasm. The AD/AE process lasted 12 months from the initial meeting between the Chairs.

The AD/AE structure and process

To avoid confusion between AD and AE, the phases were clearly distinguished (Figure 1). A primary issue from the start was determining how much reproducibility should be a requirement and how much should it act as an incentive to improve the current state. Our philosophy was to take a hybrid approach emphasizing that reproducibility is a carrot instead of a stick. However, we did put in one minimal form of a stick: a bit signal that indicates to the TPC, whether the paper passes the Artifact Description reproducibility requirement. This rule was chosen so that authors are engaged to minimally think about reproducibility before paper submission.

Figure 1: AD and AE are independent. AD provides a signal to TPC.

The AD/AE co-chairs conducted 3 webinars in total: 2 were for reviewers to understand AD and AE process, and 1 was for authors and reviewers combined to understand computing infrastructure.

The AD requirements, from the author’s side, consisted of filling a form asking to report H/W, S/W requirements, environment configuration, source code links, and details of experiments. Figure 2 shows the success of AD reporting after each AD form was reviewed by 2 reviewers. Out of 361 papers, 64 were desk rejects by the TPC. Out of the remaining 101 were marked inadequate ADs, 100 were marked OK, and 96 were marked Excellent. After 131 discussions, 87 of the ADs were updated. The TPC committee was informed that 7 out of all ADs are inadequate. Amongst the 99 papers that got accepted to SC signal, only 1 out of the 7 non-OK ADs was accepted by the TPC and was marked as major revision. The TPC was concerned about the artifacts description quality of this paper, and an acceptable AD was considered as a requirement for the TPC to accept the major revision. As the numbers report, the quality of AD after the discussion improved, and 55 were OK and 36 were marked excellent.

The following Figure (Figure 3) compares the average AD evaluation of accepted and rejected papers across different areas. In general, as we see the evaluation score is higher for accepted papers. We believe that ​​mere participation does not translate to improved reproducibility—reproducibility is improved by independent verification and the review process introduces small deadlines in the process so authors can continue to enrich their artifacts. 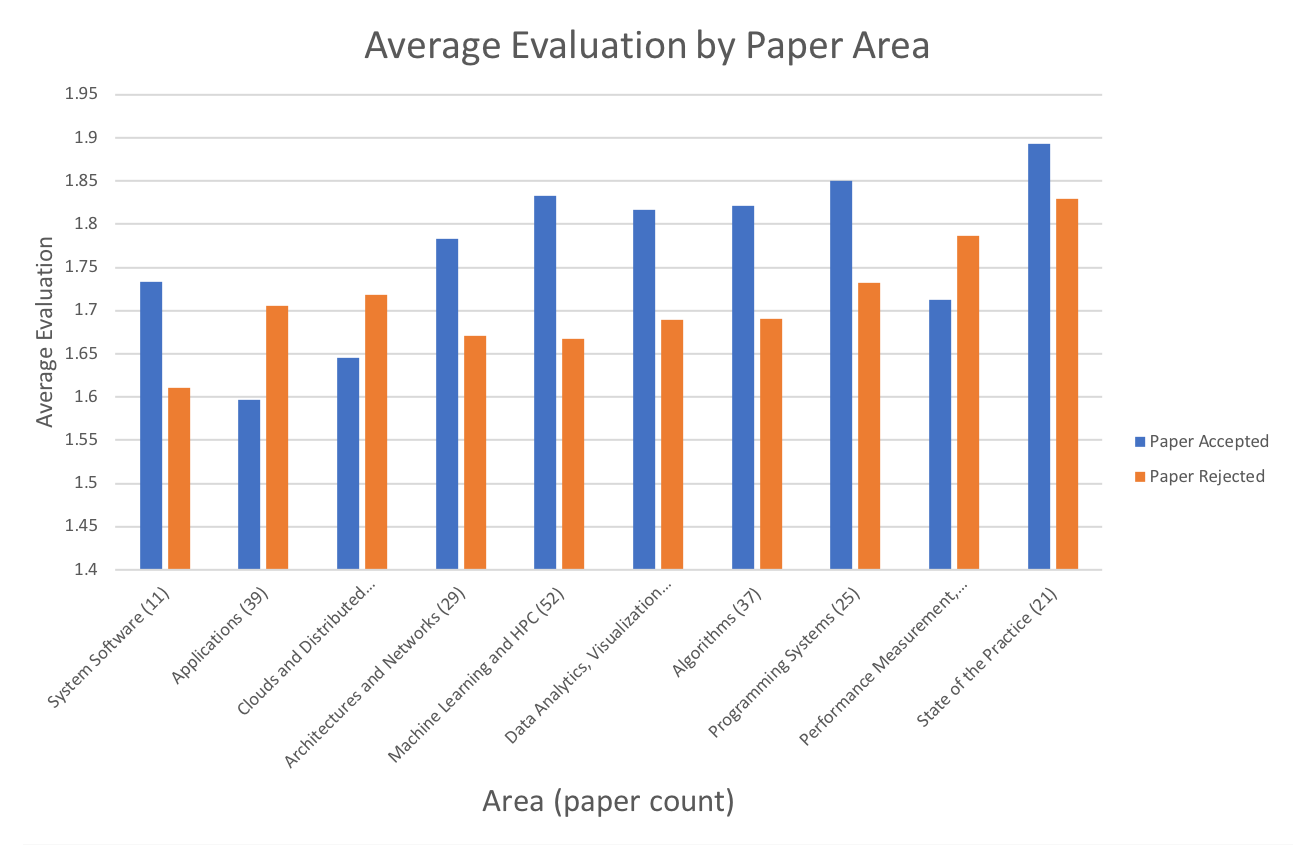 The AD reviewers checked for completion of the AD form: hardware, software requirements, compilers, documentation, and validity of Github repositories. A text analysis of the AD requirements showed the following: Out of the 331 AD descriptions that we analyzed, the primary operating system of choice is Ubuntu (113), followed by CentOS (85), Red Hat (53), Suse (18), Mac OSX (8), Fedora (6), Windows (5), Cray (5), and others (38). The primary compiler used is GCC with 192 mentioning it. 41 also mentioned Python. CUDA and MPI were the common libraries that were mentioned.

The AE process for SC21 consists of reviewing artifacts for AA (Artifact Available), AF (Artifact Functional), RR (Results Reproduced) badges. While these badges are specific to the ACM badging system we, in collaboration with ACM and IEEE, have ensured continuity by aligning both ACM and IEEE badges for future conferences.

Table 1: Badge Interest at the Time of AD submission Vs After Paper was Accepted

The following figure presents in which areas authors were more inclined to go for AE badges. Clearly, the winner is data analysis and visualization in which 9 out of 10 papers wished to be badged vs on the opposite spectrum was Performance, Measurement, and Modeling in which 4 out of 7 did not wish to be badged. The trend is clear–more systems and tools-based papers wished to be badged than papers in applications, state of practice, and performance measurement which are traditionally known to be hard to reproduce areas. Even in these difficult areas, a majority decided to apply for badges. 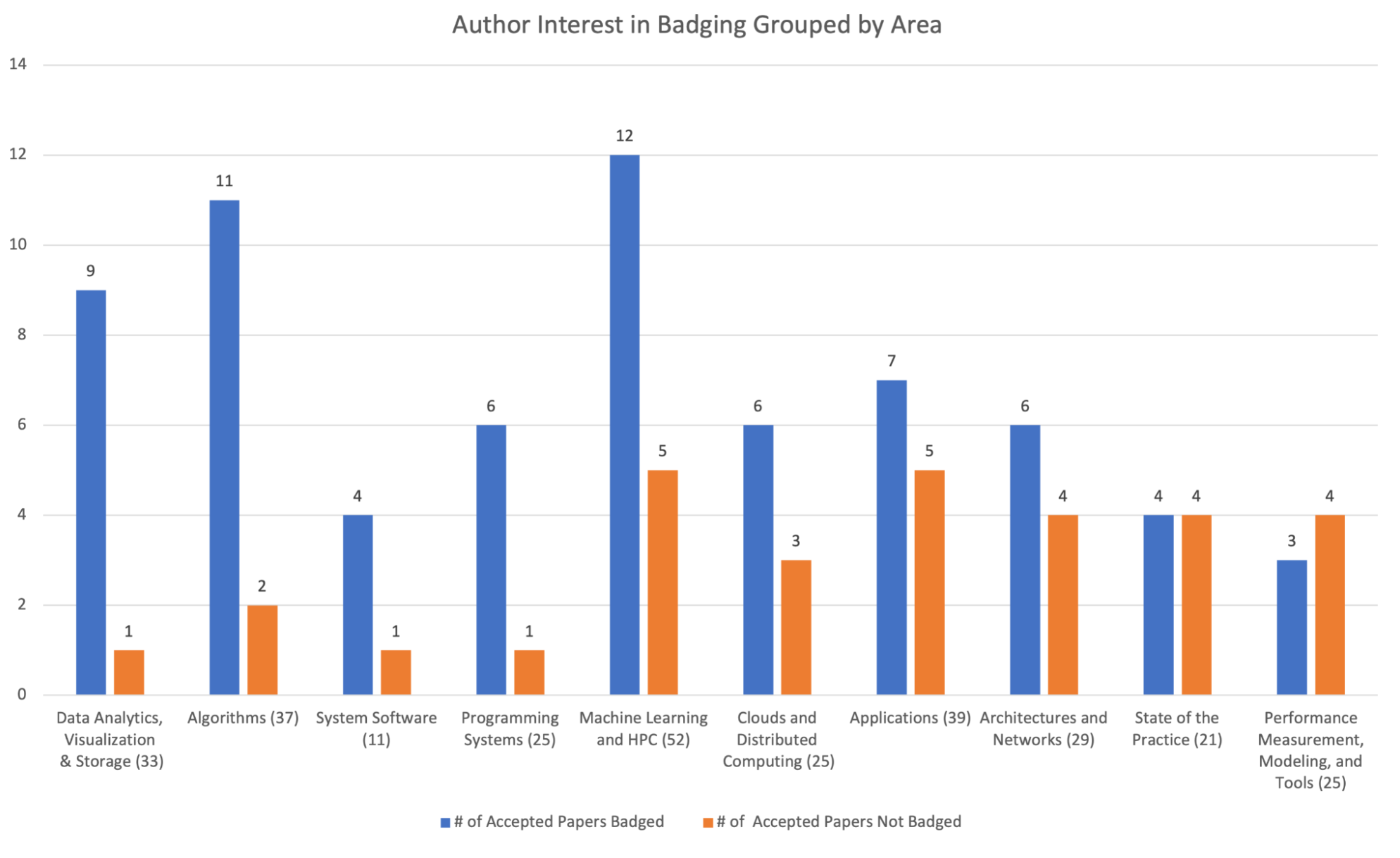 The AE review discussion process consisted of 133 assignments and a total of 240 reviews with an average of 1.92 out of 2 on reviews. The AE review process was an interactive, anonymous collaboration between reviewers and authors. A total of 879 committee-author comments were generated with the highest being 50 comments on a single paper. This data does not include interactions via Slack and Email.

The reviewing lead to the following badge status:

Table 2: Badging results for accepted papers *(Excluding 2 major revisions which would have received all three badges)

Compared with all the papers, about 70% of accepted papers received at least one badge (67 out of 97). The percent of granted badges based on the applications is higher since we do not consider the full 98% of papers.

While we successfully completed the AE of all papers that applied for it in the given amount of time, there was always the overarching concern of the time and resources required to achieve AE. To assess AE, we gathered feedback from AE reviewers on a variety of questions. We summarize the salient points of this survey responded by 14 of the reviewers:

Use of Community Computing Resources

SC21 partnered with computing resource providers: Chameleon, CloudLab, and XSEDE. The three providers gave detailed presentations to authors and reviewers for use of resources during evaluation. In SC21 AE, infrastructure was primarily reviewer-initiated. Except for one case, the authors did not request community computing resources. This could be attributed to the fact that the community computing resources were introduced in June, just before the AE phase started. Had they been introduced early in January or February we believe authors would have heavily used them.

Requests for specialized hardware were uniquely satisfied by CloudLab such as NVMM memories and V100 NVIDIA GPUs. Chameleon provided significant computing resources on commonly used VMs. Chameleon generously allocated 20000 SUs out of which 7% was used by 10 reviewers. Since the reviewer request was mapped to a single paper, we can say that 10 papers used Chameleon for their evaluation purposes. This is different from the 3 author-mentioned papers. Chameleon user interface helped us also keep track of usage and the assigned reviewers. CloudLab was used in 2 papers where specialized hardware was asked. TaCC Fronterra was used by 3 reviewers, and Piz Daint was used by assigning a third-party liaison, under whose access, the reviewer could perform some evaluation anonymously. Summit was used in 3-4 papers. However, the process for requesting access to Summit was too involved. In 2 cases, authors screen casted their artifact reproduction to the evaluators. In yet another case, the results were not reproduced by the AE committee due to a lack of timely access to the TaCC H/W. In this case, the authors provided a very detailed report to the AE committee, with screenshots to prove the validity of the Artifact Functional and Results Reproduced badge. In other cases, the results were partially reproduced.

Badge association and preservation of artifacts

To maintain an association between an SC paper and the artifact, we worked with the SC website team, the ACM Digital Library (ACM DL), and sysartifacts (a website collecting artifact evaluation results of computer systems conferences). Our objective was to use these websites for curating and preserving the artifacts. Both, the SC website and the ACM DL allow searching for papers with badges and also directly link to the DOI of the artifact of the paper. While we required a DOI for the artifact available badge, we offered authors several alternatives for long-term storage and DOI creation including Zenodo and storing artifacts directly in the ACM DL. For the first time in SC history, 6 artifacts chose to store their artifacts in the ACM DL along with their paper. All these efforts make finding an artifact of a paper as easy as possible and offer long-term storage for the artifact avoiding failing links or removing Github repositories. To achieve these goals, we developed and open-sourced tools to support the required publication formats of the ACM DL.

The Best Reproducibility Advancement Award committee consisted of a total of 11 members including the AD/E co-chairs. There were a total of 19 paper nominations by the authors and reviewers. Four of these were excluded primarily based on AD/AE reviews. 15 were provided to an Award Review sub-committee, which consisted of the AD/E co-Chairs and 4 other members of the Award committee who were also members of the AD/E program committee, and were well-versed in the art of artifact creation. This sub-committee shortlisted 5 from the 15 to be considered for the award. The committee met over Zoom; Each member presented a case of why their pick should be given an award. Everyone voted on the artifacts.

The paper won the award because of its simplicity, ability to link supercomputing analysis to an interactive Jupyter notebook and pandas data frames, allows for experimentation with various sized datasets, and simplicity of the packaging.

We learned the following lessons with the SC21 AD/AE initiative:

We would like to extend our gratitude to the Reproducibility Initiative Chair and Vice-Chair, Carlos Maltzahn and Ivo Jimenez. We would like to thank also thank the SC21 steering and organizing committee members: Bronis R. de Supinski, Jeffrey Hollingsworth, David Abramson, Ilkay Altintas, Mary Hall, and Todd Gamblin for their continued support, discussions, and patience to develop an artifact description/evaluation process based on voluntary badging. We also thank the artifact evaluation committee for their relentless effort to review and evaluate artifacts. We adapted the artifact evaluation process based on established processes in operating/distributed systems and programming languages conferences.